OUR BUILDINGS – A TRULY MEMORABLE STAY 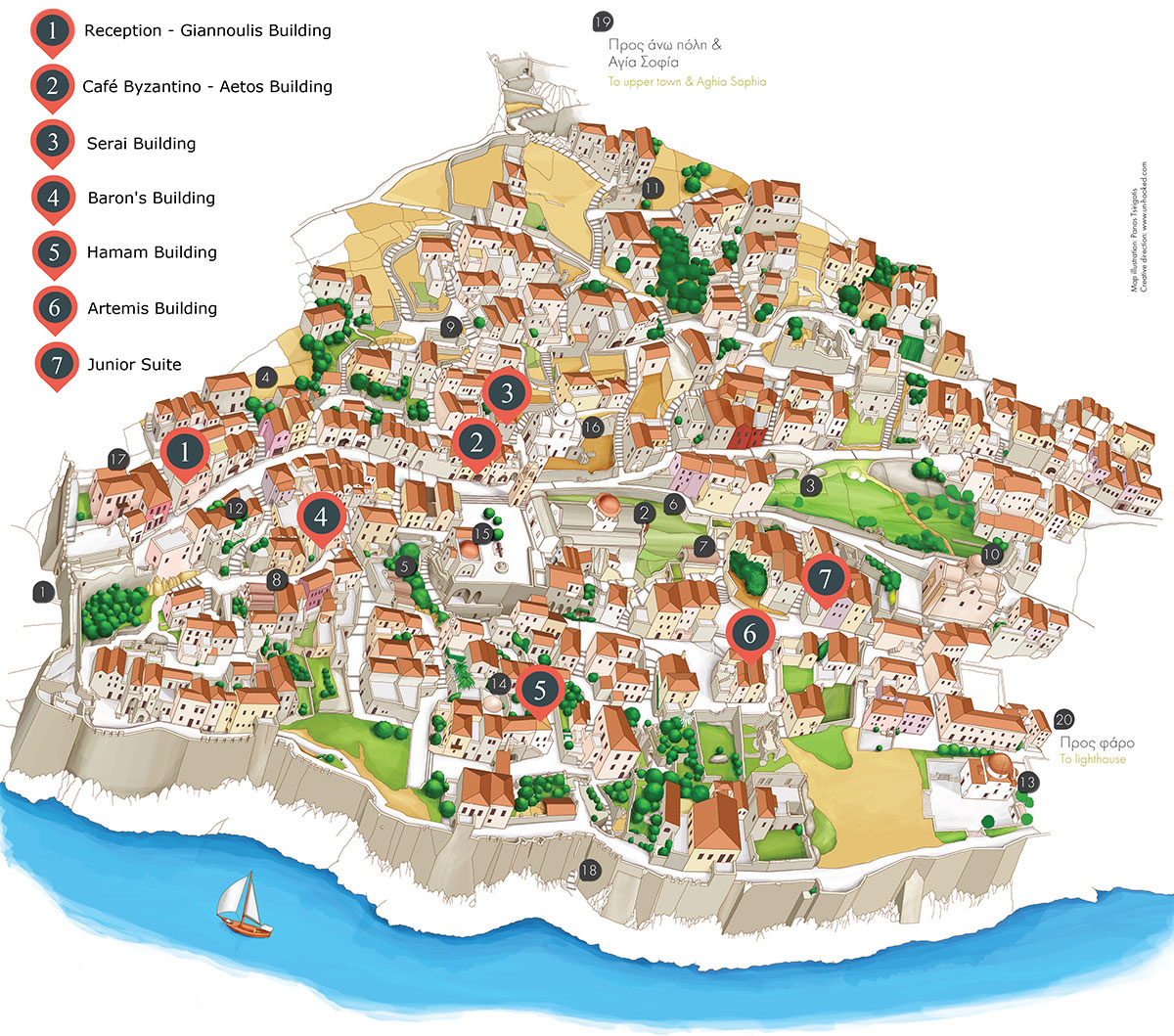 1. Reception – Giannoulis Building:
A building of the 16th century which has always been a grocery store due to its location on the main road and very close to the gate of the castle. In 1855 it was fully photographed and drawn by Robert Schultz and Sidney Barnsley of the English Archaeological School, as an exemplar building of the castletown. Today it houses the hotel's main reception on the ground floor and a Superior Double Room with Balcony upstairs [G1].

2. Café Byzantino – Aetos Building:
A large building standing just on the main square of the Castle, known as “the Cannon”. In the old times, it used to be the shop of the tinsmith or lamp maker of the town, a very useful craft in those days. Later on, it housed the offices of the Association of Monemasians under the presidency of Ms Paraskeva. The corner of the building, just opposite the steeple of the church of Christ Elkomenos, used to be the main bakery of the castle town until the years after the Second World War. The building took its name from the wrought iron door with the double-headed eagle.

Today it houses the Café Byzantino, where you can enjoy your breakfast as well as 5 rooms on the upper floor of the building:

3. Serai Building:
A complex of two adjacent buildings with an inner court yard, located in the neighborhood known as “Cretan” next to the Church of Virgin Myrtidiotissa. During the Ottoman rule of Monemvasia, they used to be Ottoman mansions (lofts).

4. Baron’s Building:
Building of the first Turkish occupation (approx.1540 AD). It was an Ottoman mansion with a private hamam in the lower part. Due to the steam room, it had two internal water tanks and two exterior fireplaces to heat the water. The fireplace in the room P15 is over 300 years old and it’s still fully functional. The building has the largest terrace in the Castle Town, which currently belongs to the Café Bar «Enetiko», with entrance from the main alley. The building was named after the French Baron Jean Paul De Bolny, who was its owner during the early 20th century.

Today, apart from the Café Bar «Enetiko», it houses the following rooms:

5. Hamam Building:
Building of the first Turkish occupation (approx.1540 AD). It was the only mixed public bath (hamam) within the Castle which operated until the 1950‘s. Its characteristic architectural style and decoration belongs to Turkish baroque style (morisco). In its basements, there are large water storage tanks, and two or three external fireplaces, while it retains intact the old thermal pipes network for transporting hot water.

6. Artemis Building: The building is located near the Virgin Chrysafitissa Square. Today it houses the Quadruple Family Room | Split Level [A9].

7. Junior Suite: The building is located in an elevated position within the castle, next to the church of St. Nicholas. Today it houses the hotel's Junior Suite.